If you happen to be in Lyon, please join us for our regular UDC Update session at the 2014 IFLA General Conference and Assembly.


Members of the UDC Editorial team will give a brief presentation on the current developments in the UDC, ongoing translation projects, forthcoming publications and events.

The UDC Update Newsletter is available here.
Posted by Aida Slavic at 21:20 No comments:

Courtesy of  W. B. Rayward:

Prof. W. Boyd Rayward and Prof. Eugene Garfield have endowed a lectureship named for Paul Otlet Lecture at University of Illinois. The first lecture entitled "When Was the Age of Information?" will be delivered by Prof. Paul Duguid  from School of Information at the University of California, Berkeley) on 5. May 2014.

About the Otlet Lecture:
Paul Otlet (1868-1944), a Belgian lawyer, bibliographer, internationalist, and pacifist, became concerned as a young man about the increasing volume and fragmentation of the literature of science and scholarship. With his colleague, Henri la Fontaine, winner of the Nobel Peace Prize in 1913, he spent his life in building experimental “knowledge” institutions that he hoped might facilitate global access to information in a range of new formats. His analyses of what he called documentation, of multimedia substitutes for the book, of encyclopedias, museums and libraries led him to explore the possible use of the new technologies of his days such as x-rays, radio, telegraphy, cinema, sound recording and eventually television for disseminating information through a universal information network. And he proposed special organisational arrangements for the network’s management and use by means of what he called Mundaneums. He also envisaged the development of a range of new kinds of intellectual machines and instruments that, suggested by what was already available, would create new functionalities in information access and use. In these ideas we find foreshadowings of the digital and other technologies that have created such phenomena as the Internet, the World Wide Web, Google and even—and perhaps especially—Wikipedia, that are fundamental to what we now regard as a new kind of information society.
Posted by Aida Slavic at 22:33 No comments: 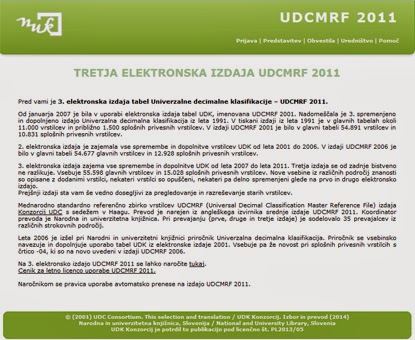 The third online edition of the Slovenian UDC "Tretja elektronska izdaja UDCMRF 2011" was released in January 2014.

This online UDC tool was created by the National and University Library Ljubljana (Slovenia) in 2001, the second updated of the Slovenian translation was published in 2006, followed by the new translation release in 20014.

This edition is based on the standard UDC abridged database, which includes over 10,000 classes and is extended by the complete place subdivision for the Netherlands, Belgium, Suriname and the Caribbean Netherlands and the history of the Dutch speaking countries.

The book has over 400 pages and contains an introduction to the UDC and a comprehensive alphabetical index of over 19,000 entries. It is envisaged as a practical manual for practitioners working with UDC and  for training and teaching classification.

The book can be ordered from the UDC Consortium online bookshop.
Price: € 59,00