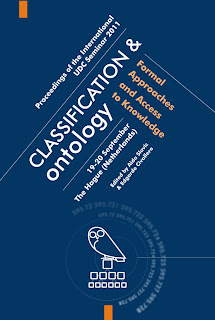 Proceedings of the International UDC Seminar 2011 are published by Ergon Verlag.

The book will be distributed in delegate packs at the conference in September and will be available for purchase following the event.

CLASSIFICATION AND ONTOLOGY:
Formal Approaches and Access to Knowledge
19-20 September, The Hague
Venue: Koninklijke Bibliotheek
Fee: 200 EUR (secure your place at this event)

Ontology-like representations of classifications are recognized as potentially important facilitators in creating a web of linked data.

The conference keynote speaker is Professor Patrick Hayes, one of the key players in the Semantic Web initiative and the development of RDF, OWL and SPARQL. His talk entitled "On being the same" will remind us of some oddities and internal inconsistencies in data found on the Web, as the Semantic web starts to take shape with the rise of linked data.

Members of the UDC Editorial team and UDC Consortium (UDCC) will provide an update on current developments, new translations, editions and services. The meeting will provide an opportunity to exchange information and discuss issues in relation to the UDC.

Important: UDCC has presented us with 5 vouchers for 70 EUR discount on the regular conference fee for the International UDC Seminar "Classification& Ontology: Formal Approaches and Access to Knowledge" 19-20 September, The Hague. Vouchers will be given away at the meeting on a first-come, first-served basis.
Posted by Aida Slavic at 21:15 No comments: