Following the success of the 2009 conference we are very pleased to announce the next in the series of biennial conferences devoted to the advancement of bibliographic classification research, organized by the UDC Consortium and hosted by Koninklijke Bibliotheek.

The difference between bibliographic knowledge classification schemes and ontologies resides in their particular purpose and levels of formality. However, they are both based on observation and reasoning and share some structural principles and elements: categories, concepts, properties, class relationships, roles.

The objective of this conference is to promote collaboration and exchange of expertise between different fields dealing with knowledge classifications: bibliographic, web and AI. We hope to learn more about methods in ontology modelling and whether these may be used to improve and formalise data models of bibliographic classifications and enhance their value in information discovery.

To read more about the invited topics and to submit contribution go to the conference website.

On Lonclass, UDC and RDF

An interesting read about sharing and linking data on Dan Brickley's blog "danbri’s foaf stories: the web, the world, us, you and them" explaining some of the ideas behind the NoTube 'semantic television' project.

"Lonclass is one of the BBC’s in-house classification systems – the “London classification”. I’ve had the privilege of investigating Lonclass within the NoTube project. It’s not currently public, but much of what I say here is also applicable to the UDC classification system upon which it was based. UDC is also not fully public yet; I’ve made a case elsewhere that it should be, and I hope we’ll see that within my lifetime. UDC and Lonclass have a fascinating history and are rich cultural heritage artifacts in their own right, but I’m concerned here only with their role as the keys to many of our digital and real-world archives.

Why would we want to map Lonclass or UDC subject classification codes into RDF?

[....] The work needs to be shared, and RDF is currently our best bet on how to create such work sharing, meaning sharing, information-linking systems in the Web. The hierarchies in UDC and Lonclass don’t attempt to represent all of objective reality; they instead show paths through information.

[...] Classification systems with compositional semantics can be enriched when we map their basic terms using identifiers from other shared data sets. And those in the UDC/Lonclass tradition, while in some ways they’re showing their age (weird numeric codes, huge monolithic, hard-to-maintain databases), … are also amongst the most interesting systems we have today for navigating information, especially when combined with Linked Data techniques and companion datasets."
Posted by Aida Slavic at 13:44 No comments:

Colleagues who are going to be at 76th IFLA General Conference and Assembly "Open access to knowledge - promoting sustainable progress" in Gothenburg (Sweden) are cordially invited to join us at our traditional UDC Update Session on Friday 13 August 2010, 13:00-14.00, Room R2.
Posted by Aida Slavic at 09:39 No comments: 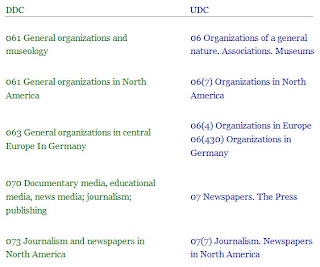 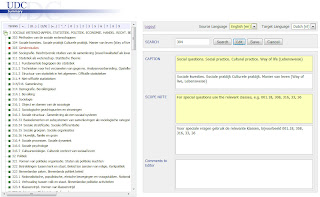 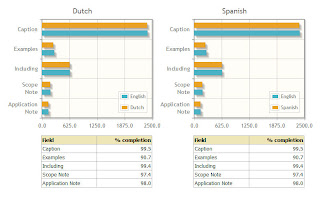 This weekend we uploaded over 2000 UDC classes in the Ukranian language into the UDC Summary. This is the 17th language so far.

Thanks to help from the publishers and editors of national editions and editors of the UDC Summary, we managed to import almost the complete set of UDC numbers that we needed for many languages.

Our online translator seems to do its job and is being expanded with further features as we speak. Most of the credit, however, goes to our hard working volunteers without whom the whole project would not be possible. We expect that many languages of those that are already online will be completed and proofread by June 2010.

The first alphabetical index and mapping to Dewey summary will appear in March. And we also hope to have the first useful exports available for download. We will be looking for other mappings that may be available and we welcome ideas and suggestions.
Posted by Aida Slavic at 17:15 No comments: 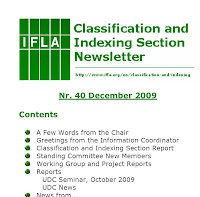 The latest issue of the Classification & Indexing Section Newsletter (IFLA) contains a short report from the UDC Seminar 2009 "Classification at a Crossroad: multiple directions to usability".

The issue also contain a short text about the multilingual UDC Summary project.
Posted by Aida Slavic at 12:03 No comments: