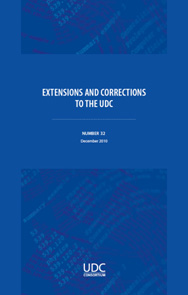 The latest issue of the Extensions and Corrections to the UDC No. 32 (2010) contains a number of articles, bibliography of UDC editions and UDC related publications in 2010, two proposals for UDC changes: corrections and the extensions of Table 1c - =4  Afro-Asiatic, Nilo-Saharan, Congo-Kordofanian, Khoisan languages  and proposal for over 800 new entries under 512.7 Commutative algebra and algebraic geometry).

This issue also brings an extensive list of UDC entries revised in 2010 and distributed with the UDC Master Reference File 2010 containing 69,093 UDC classes

All cancelled classes and their redirections are, as usual, published online.

Colleagues interested in these particular fields may wish  to check articles  on the UDC Biology revision and proposal for the improvement of African languages.

Please note that all articles from EC31 (2009) and EC 32 (2010) are also published in the Digital Library of Information Science and Technology (DLIST). The 2009 EC issue also contains proceedings of the Internatonal UDC Seminar 2009 and all articles can now be downloaded from DLIST (apart from those published in the Knowledge Organization journal, vol. 37 2010).